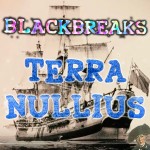 Move away from the quarterdeck, what are you doing sailor?
We’re going to New Holland!
Rom-pom-pom-pom-pom pom-pom!
We brought our Union Jack!

And so begins the introduction of the Blackbreaks song “Terra Nullius”. With a yelling protagonist modelled on an angry Arthur Phillip circa 1788, the Commander of Britain’s “First Fleet” of convict laden ships bound for what is now known as Australia. Phillip was soon to become the first Governor of the fledgling colonial outpost.

‘New Holland’ was the earlier European term for Australia. However, during his seminal voyage some 7 years earlier, British explorer James Cook named the Australian eastern coast ‘New Wales’, later revising it to ‘New South Wales’. It was only after settlement by Phillip that it officially became known as New South Wales, but even then, only the east side of the continent – to the 135th Meridian, while the rest in the west remained known as New Holland.

Rom-pom-pom-pom-pom pom-pom! Is a well known refrain lifted from the song ‘The Little Drummer boy’ which was itself based on a traditional Czech Christmas carol. The idea that Phillip would have known this at the time is clearly tenuous. Nevertheless, conceptually the idea was based on the use of military drummers, and there were certainly military musicians and drummers on the first fleet. The idea of drums for marching soldiers and for motivation and communications on the battle field was said have Chinese origins, and is believed to have been brought to Europe via the attempted Ottoman invasions possibly as early as 1300’s.

We brought our Union Jack! The ubiquitous flag of the British Empire. In fact the flag flown by Governor Phillip would have actually been different to what we are familiar with in the modern era. It would have been the similar looking ‘Flag of Great Britain’ which had one less red ‘X’ or saltire which later represented Ireland. This earlier version was the maritime flag used until 1801.

Bring on some modern British football crowd, or ‘Barmy Army’ style cricket chants, and blend with something that may have been sung in the 1780’s.

Into this first proper verse, the song now shifts from the perspective of being at sea, to the first impressions of the people of this new land. Our protagonist, still based loosely on Phillip is perhaps diarising, or thinking to himself.

The ‘Backward Savages’ line is very important to note, this is definitely not Blackbreaks calling Australian Indigenous peoples ‘backward savages’ but is rather an imagined statement from the first Governor, using the historical terminology of the day. The unchristian ‘backward savage’ was a label first used on American Indians, who needed ‘whites’ to show them the true way. James Cook used similar terms on the Australian indigenous, stating they “appear to some to be the most wretched people upon Earth”, however interestingly he added they may actually be happier than Europeans as they had everything they needed. Cook here was also clearly influenced by the French Enlightenment philosopher Jean-Jacques Rousseau and his concept of the ‘Noble Savage’, which dovetailed into another pervading idea at the time, of ‘Noblesse Oblige’ – that superior whites had a moral obligation to bring these backward people out of the darkness and into the civilised Christian light.

Here was the belief in the “utmost superiority” of Europeans, where science and inventions like guns (and gun powder, again ironically from China) were proof that they were smarter and lived a superior more complex existence than non-Europeans. This belief does not stand to reason, and illustrates the ignorance of the British of Australian Indigenous language, culture and advanced scientific knowledge of their own land and resources, including foods and medicines.

George the Third was King of England at the time of Phillip’s declaration at what is modern day Sydney’s Circular Quay.

So We dreamed up our legal fiction
Spoken in our perfect diction
While they looked on in disdain
We stood proudly to proclaim
Terra! Terra Nullius!

This is perhaps the primary point of the song – that Terra Nullius, the declaration of ‘land occupied by no-one’, meant that the Indigenous Australians were considered not real people at the time of British arrival. This means the establishment of the Australian colony was from the outset based on a lie, a point legally confirmed more recently by the Australian High Court decision known as Mabo.

But lies are of course acceptable if spoken truly in the Kings perfect English. Anyone (such as the lower social classes in Britain) unable to keep up with the Kings accent of the day were considered the lesser, and more so anyone who could not speak English at all. The most absurd example of this is how Spanish people to this day still speak with a pretend lisp.  This is because one particular Spanish King had a speech impediment in the form lisp and to keep up with the style everyone in the know copied him. But this happened after South American colonial settlement, so Spanish speakers in that location have retained the earlier lisp-free version of the language.

And there we have it – a proclamation by Governor Phillip, in the name of the King, makes all the lies a truth.

The Sweet Britannia line is swiped from the famous ‘Rule Britannia’ which had its lyrics set to music back in 1740. Possibly one of the most pompous and embarrassing songs in the great history of British colonialism, it is still sung with great absurdist gusto yearly at the globally televised ‘Last night of the Proms’:

“When Britain first, at Heaven’s command
Arose from out the azure main;
This was the charter of the land,
And guardian angels sang this strain:
“Rule, Britannia! rule the waves:
“Britons never will be slaves.”

But there is a problem for the Europeans, that closing your eyes and pretending to sleep doesn’t make people disappear. You cannot dream your troubles away, nor can you ever simply wish away a whole people.

We don’t care about your languages
Your culture or your art,

Language is now known to be the basis of human thought and a cornerstone for the formation of culture.  It is a particularly telling historical fact that even into the 1960’s in some Australian locations (schools, orphanages, “protective” missions) speaking in a native Australian tongue was strictly banned and enforced with severe punishment.

Similarly Australian Indigenous culture and art is being recently ‘rediscovered’, to be incredibly rich and complex, despite years of colonial attempts at all manner of suppression. This lives on today where Australian archaeologists are still forced to keep location of rock art strictly secret as thousand-year-old locations are routinely vandalised or destroyed by the ignorant and the racist.

The whiteness of our hearts was inspired by the absurdity of modern alt-right and skinhead style philosophies, ironic as hearts, like brains, are all coloured the same, no matter what the so-called ‘Race’.

With Ignorance and Arrogance, the song gives way to an admitted universal guilty plea of the colonial soldier.

We don’t understand your flora,
Your fauna or your fire.
You walk naked with impunity
Yet you fight off our desire,

Again, its only in recent decades that mainstream Australian governments, scientists, fire fighters, chefs, and academics are turning their attention and giving belated respect to the incredible complexity of flora, fauna and fire management, and associated knowledge that is actively kept by Australian indigenous communities. This reinforces the absurd fundamental ignorance of the British in their approach to understanding new lands.

‘You walk naked with impunity’, was the term used by writer Henry David Thoreau in his book Walden:
“So, we are told, the New Hollander goes naked with impunity, while the European shivers in his clothes. Is it impossible to combine the hardiness of these savages with the intellectualness of the civilized man?”

‘Yet you fight off our desire’ references the widely insinuated early sexual assaults particularly between convicts and soldiers and indigenous women.

Such dreams will indeed soon fade away, because one day all Australians will wake up:

We are on Aboriginal land.